If you own any kind of electronic device that has ever used iTunes, you may have noticed you received a gift from U2 last week. Or did you? The band’s thirteenth album, Songs of Innocence, “released” itself into the accounts of every single iTunes user.

Apparently, U2 wanted to give the music away, but they also didn’t want to give it away—because of the degradation of the value of music caused by giving music away. So, they asked Apple to buy it, reportedly for $100 million, and give it away to every one of their customers. (Of course those of us who aren’t Apple CEO’s or members of the Illuminati will never know how this deal was actually arranged, but…). Says Bono:

[Apple] bought it as a gift to give to all their music customers. Free, but paid for. Because if no-one’s paying anything for it, we’re not sure “free” music is really that free. It usually comes at a cost to the art form and the artist… which has big implications, not for us in U2, but for future musicians and their music… all the songs that have yet to be written by the talents of the future… who need to make a living to write them.

At first take, this seems generous of U2. It seems to subvert the transactional nature of capitalism, so it’s kind of sticking-it-to-the-Man-ish, or at least kind of like sticking the Man with the bill so the little guy can get some free music. U2, one of the biggest bands in the world is giving away their new album. They didn’t need to do that. Millions of people would gladly have paid good money for it. If it’s free to me, it’s a gift, right?

Except the problem is, in the process of selling the album to Apple, U2 turned it into advertising. It’s fuzzy exactly how it’s functioning as advertising, but it’s not at all unclear that it is. It’s sort of an ad for the new iPhone. The debut single from the album was performed live for the first time ever at the product launch for the iPhone 6. And a video (called an “ad” on their website) for it, which can be viewed at apple.com, ends with an image of the Edge smashing his guitar which the viewer is seeing on a screen-within-the-screen of an iPhone 6 being held by a revolutionary fist.

It’s sort of an ad for iTunes. The aforementioned video for the first single is shot in the now-recognizable, heavily branded visual language of iTunes commercials: high-contrast, near-sillouettes of human figures against solid backgrounds.

And this time the colors of the near-sillouettes have been updated to the not-quite-flourescent-not-quite-pastel color scheme of iOS7 and 8 and employ Johnny Ive’s signature use of gradient. So it’s sort of an ad for iOS8 too.

But, you might protest, the fact that it became a commercial in the process of the business rigamarole that got it into my hands for free shouldn’t matter to me. How I got it doesn’t change the music itself. Except that it does. Try as I might to hear it as something else, “Miracle (of Joey Ramone)” is a commercial to me. It came to me as a commercial. It sounds like a commercial when I listen to it. I cannot NOT hear it as a commercial. The chunky, fuzz-toned guitar riff is still enjoyable to listen to, but invariably sparks a kind of Pavlovian association to the Apple brand and thickens a linkage between my aesthetic tastes (and, therefore, my desires) and Apple products. 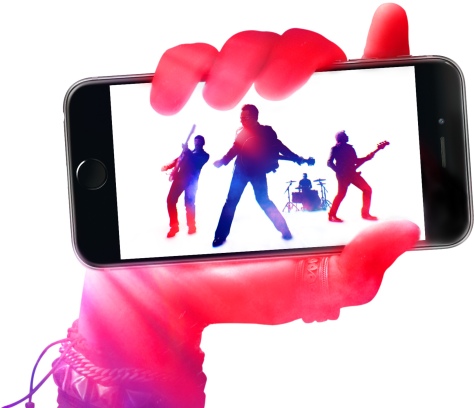 [There’s a whole nother layer of this around the fact some of these songs are about U2’s punk rock roots and the fact that they are dragging their punk rock heroes into these advertisements, but the subsumption of counterculture by consumer capitalism is a theme I’ve already explored elsewhere, so I won’t go into that in this post].

I’m not hating on U2 here. In fact, I hate U2 haters. I like U2. My instinct is actually to trust that their intentions are entirely innocent (Get it?). But I’m not making a comment about U2 here at all. What I’m talking about is the gesture. The gesture of giving music away for free (even music that someone else paid you for) and what the possibilities are for the meaning of such a gesture in our current cultural context.

[Sorry, another thing about the punk layer that I’m not going to write about: Another way I’m not hating on U2 here is that I’m not saying that they are appropriating or a co-opting punk rock in a way that’s disingenuous or predatory. I’m old enough to remember that U2 has a legitimate claim to being a part of the punk revolution. They are not stealing Joey Ramone or Joe Strummer or reconstructing a personal history that isn’t true. They really did make really important, influential music that was heavily influenced by the original punk scene. Joshua Tree was mind-blowing and deserves the spot it has claimed in rock history.]

There may have been a different way that U2 could’ve given this album away—Radiohead and Jay-Z and the Wu-Tang Clan have all tried slightly different models—a way that would’ve not turned the music into advertising. But even if they had, would the music still have retained the qualities of a gift? Would the gesture of giving it away still have meant what a gift means?

I’m doubtful. No matter how they had chosen to do it, there’s is no way a band as big as U2 operating in an economy such as ours could’ve given away their music such that it didn’t some how redound to their benefit (e.g., free publicity, increased sales of their other albums, concert ticket sales, etc.) Even if their intentions were good, the net result would be a scheme, a PR stunt, a “new business model.”

And the nature of a genuine gift is that it involves a sacrifice on the part of the giver. Generosity involves giving someone something beyond what you owe them or what they deserve without  regard for the cost to yourself.

The reason this is so interesting in relation to U2 in particular is because grace—the religious name for this kind of selfless giving—is such a prominent theme in their music. The most obvious example being the song “Grace”:

Grace, she takes the blame

She covers the shame

It could be her name

Grace, it’s a name for a girl

That changed the world

Global capitalism and cloud servers might create the illusion that humans can do something genuinely generous for 500 million people, but I’m not convinced that’s even possible. And I’m certain that if it were possible, whatever that gift would be, it wouldn’t be an ad.

4 thoughts on “This is NOT a Gift: That U2 Album You Didn’t Ask For and the Possibility of Generosity”

Chosen by WordPress Editors to be

stargazing with the bride

Because you don't have to interpret Scripture on your own